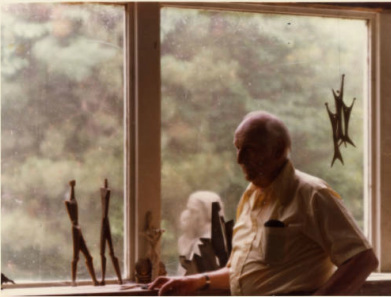 Koepnick in his studio, 1983.
Robert Koepnick was born in Dayton, Ohio, July 8, 1907. He was raised in West Dayton at 326 Pontiac Ave. and attended nearby St. James Catholic Church and School. Koepnick’s father, Louis Koepnick, was born in Dayton in 1879, making Koepnick at least a third generation Daytonian. Koepnick attended high school for only a short time (not uncommon in the early 20th century) but with his talents obtained work as an architectural modeler and plasterer. Koepnick studied sculpture at the Dayton Art Institute and then under renowned Swedish sculptor Carl Milles at Cranbrook Academy of Art in Michigan.

Koepnick met and married Mary Elizabeth “Betty” Borland, of Wheeling, W. Va., during World War II. Their sons, Richard and John, were born in 1944 and 1950 respectively.

Even though he attended high school for only a short time, Koepnick’s talents and experience working as a decorative artist earned him a place as a student at the Dayton Art Institute. In time he was given an opportunity to teach Saturday children’s classes and later to head the sculpture and ceramics department. Koepnick worked at this position, with the exception of World War II service from 1941 to 1946, for nearly 40 years. From 1933 to 1938, under Siegfried Weng, director of the Dayton Art Institute, Koepnick produced terra cotta figures for Dayton schools as part of Works Progress Administration’s Federal Art Project. Also, with Weng and other Dayton Art Institute staff, Koepnick founded the Dayton Society of Painters and Sculptors in 1938. The society, now more than 75 years old, continues to mount regular shows at their High Street Gallery in the St. Anne’s Hill Historic District in East Dayton.

Koepnick served in the U.S. Army during World War II. He volunteered his artistic services and was put to work at Wright Field outside Dayton, designing and testing equipment, especially oxygen masks, for aviators. Koepnick and his colleagues worked with anthropological and other references to design masks and gloves for various sizes. Despite his specialized work, Koepnick was a regular GI when he was not working as an artist-designer.

Koepnick’s life spanned most of the 20th century. His career at the Dayton Art Institute covered nearly every year of the school’s existence. His public art, both ecclesiastical and secular, appeared throughout a period when architects and clients felt such work was critical to important buildings and institutions.